Why Digitalization is the Biggest Driver of Business 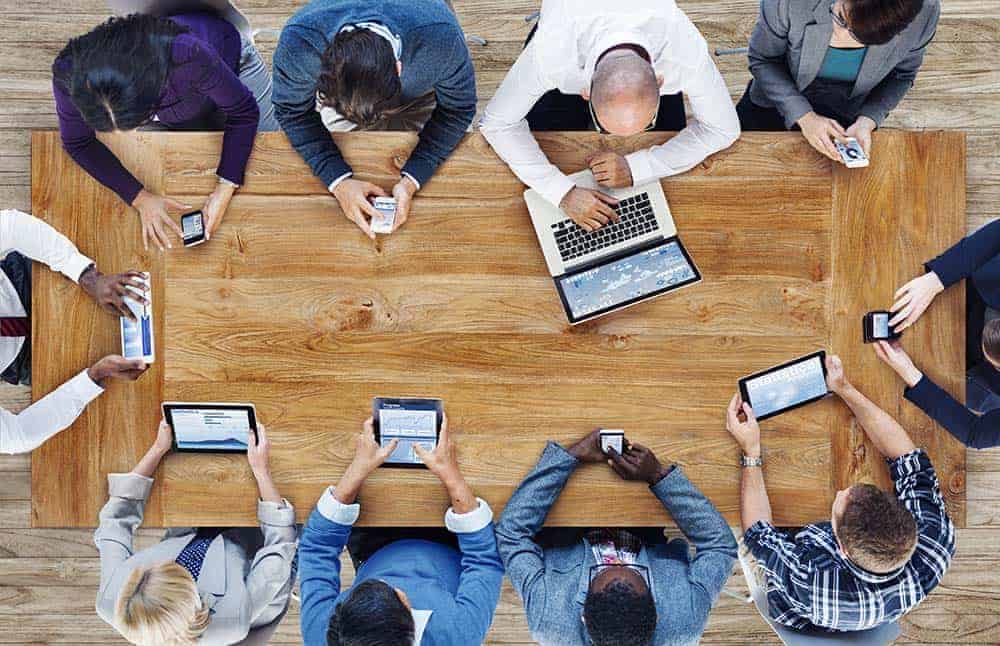 Before we get into the meat and potatoes of the article, one question deserves to be asked:

“Is there a difference between digitalization and digitization?”

We ask this question because in the course of our research for this important topic we came across references on “digitization” although we used “digitalization” for our keyword search.

Upon reviewing their content, it appears that many writers interchange the meaning of digitalization and digitization. The two terms are treated like a synonym of each other.

And this confusion may be validated by a chart courtesy of Google Trends. 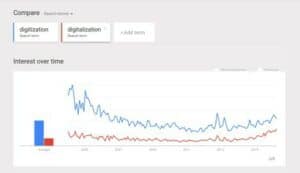 As you can see the gap of the search volume differential between both terms have been decreasing and moving along a similar trend. Digitization is still the leading search term but the increase in searches for digitalization shows that more users are discovering what the term means.

The truth is, the two terms are related but not mutually dependent of one another because their definitions are distinct. We will be very accurate by using the textbook definitions of each term.

Digitalization is defined by Gartner as the use of digital technologies to change a business model and provide new revenue and value producing opportunities.

Digitization is defined by Gartner as the shift from analog to digital form.

Gartner ties in both terms in the concluding statement of its definition of digitalization:

“It is the process of moving to digital business”.

With this in mind, let us come up with Mountaintop’s definition of digitalization:

Digitalization is the process of using digitized tools to increase business efficiency by using technology to engage with markets, identify their problems and address their needs.

A company that frequently scans documents and emails has digitized the way it transmits communication. But a company that uses technology to introduce highly efficient, cost reducing and productivity enhancing workflows and processes is digitalizing its business model.

So now that we have made the distinction between digitalization and digitization, let’s find out how and why digitalization has become the biggest driver of business.

The Evolution of Digitalization

We know technology is in a constant state of evolution. Inventors, scientists and innovators will always look for the next great idea; a product or service that will improve efficiency and increase productivity.

Those who were born in the new millennium will have a hard time comprehending how the Internet changed everything. Talk to someone who grew up in the 1960’s or 1970’s. They experienced how it was to transition from the typewriter to a desktop Personal Computer.

But as fast as digital technology has evolved, the process of digitalization has not. The word “process” implies there is a time element involved.

There is a development schedule that needs to be followed because the learning curve when it comes to technology and how it can be applied to improve business processes must be respected.

Digitalization is not intended to introduce change; it is a process that is long-term and transformative.

Change is a temporary condition. You change your diet if you want to lose weight. You change smartphones to benefit from the latest technological advances.

Transformation is a commitment to undertake a long-term journey for improvement and progress. If you want to keep the weight off, it is not enough to change your diet. You have to transform your lifestyle.

In business, if you want to remain competitive and profitable, your modeling must constantly evolve and adapt to new developments in the industry because markets are likewise evolving.

Digital technology has given consumers more access to information now than ever before. Tastes, demands, consumer preferences, desires, wants and needs are shifting because they are easily influenced by a wide range of resources and references.

It has also provided the means for businesses to thrive in the face of adversity.

Digitalization and the Growth of Business Process Outsourcing

The new millennium ushered in a great period of difficulty. Events such as 9/11, the 2003 collapse of the global equities market, the fall of Iraq and the 2008 Eurozone crisis led to massive corporate shutdowns and layoffs with many losing their homes.

Businesses had to change their modeling from rigid processes to one that offered greater flexibility and mobility.

The Internet made it possible for companies to outsource services to regions where comparative cost advantages and economies of scale existed. The biggest cost advantage is labor which is why preferred outsourcing destinations remain countries located in Asia.

At first companies were outsourcing business processes that were categorized as non-essential tasks or non-core functions. By capitalizing on lower costs of labor, companies were able to streamline operations and remain profitable even if revenues were not up to par.

A good example would be the companies located in Silicon Valley which is the technology hub in the United States. Companies were outsourcing services to India primarily to save costs. But they soon discovered their partners had talented people in I.T.

From a cost savings solution, outsourcing became a business model for improving deliverables, quality of products and service.

But the benefits of digitalization of business processes are not limited to large companies with complex systems.

Digitalization and the Rise of the Telecommuter

Digital technology also made it possible for small businesses to establish systems that had smooth workflows and efficient processes. The availability of apps and Internet-based programs allowed entrepreneurs to organize operations even with limited capital.

Project management tools like Asana, SalesForce, WebEx and GoToMeeting made close collaboration a reality. Skype, Slack and Viber were highly effective for communication. You didn’t have to rely on landline and mobile phone calls which could drive up costs of business.

Small business owners could likewise outsource services to individual freelancers like virtual assistants or telecommuters. All they need is a project management platform for collaboration, a cloud- based file sharing program and an app for communication.

Unless the entrepreneur wants to upgrade the quality of services, these programs do not carry a monthly subscription fee.

In 2014, several companies in the United States integrated telecommuters into their workforce in order to improve productivity.

Studies conducted by Stanford and the University of Minnesota showed that incorporating home-based workers or telecommuters resulted in a productivity increase of 13.5% and a cost savings of $1,900 per employee. The telecommuting business model also reduced the level of workplace attrition.

More businesses are migrating toward Internet- based models because the world has become increasingly dependent on mobile technology since 2014. It is projected that by 2020, there would be 6.1 Billion smartphones operating in the world.

Thus, it should be no surprise that e-commerce has become the force it is today.

E-commerce: The Slayer of Retail Giants

American theologian Leonard Sweet was responsible for that quote. And although he meant it in the spiritual sense, the principle has been applied to business. Some have come up with their own version such as “If you don’t adapt, you die.”

Regardless of the choice of synonym, the message rings loud and clear:

If you remain oblivious to the changes that are taking place in your industry, you will not thrive, much less survive.

2017 may be remembered as the year where e-commerce slayed the retail giants.

For years online retailers like Amazon, Alibaba and eBay were on the horizon growing their market as consumers began to realize the ease and convenience of Internet-based shopping.

Since 2014, global e-commerce has been growing at a rate of 20% per annum. It is projected to hit $27 Trillion by 2020. The rise of e-commerce has not come without casualties. In the case of retail, the victims are traditional brick-and-mortar stores that refused to acknowledge the warning signs.

As early as 2012, industry analysts were already speculating mobile devices would become the primary source of online traffic. Expectation became reality when 2014 data showed 60% of online traffic originated from smartphones and tablets. The percentage has increased to 65% in 2016.

In the United States, e-commerce had hit $414 Billion in 2014, not many took it seriously or viewed it as a reason to sound the alarm bells for traditional retail. Business writers from reputable publications believed traditional retail would still account for the bulk of the American consumer’s hard earned dollar.

Fast-forward three years later and 18 traditional retailers have either filed for bankruptcy or closed several outlets. The casualties include:

Traditional retailers like Lululemon, Urban Outfitters and American Eagle still remain popular but all have reported multi-year lows in sales.

On the other hand, one giant decided to stray away from the path of the other dinosaurs. Wal-Mart aggressively invested in e-commerce after a poor 2016 annual report.

Wal-Mart acquired e-commerce sites such a jet.com, shoebuy.com and moosejaw.com. Since the acquisitions, Wal-Mart’s fourth quarter earnings report for 2017 shows a 29% improvement for the same period the previous year.

Digitalization is not a phase. It is the way businesses will run over the next few years. Consumers will continue to depend on mobile technology to manage their daily affairs. This means technology companies will stay on course in finding solutions to make life and work easier and more convenient.

In an interconnected world, you should also expect that whatever happens in one part of the world has repercussions in other regions as well. Changes in political ideologies has led to shifts in global alliances.

The United States under the administration of Donald Trump has taken a nationalist “America comes first” approach while China has become the unexpected globalist.

Chinese President Xi Jinping has embarked on his ambitious “One Belt One Road” initiative which seeks to invest trillions of dollars in infrastructure to develop trade routes that will traverse Asia, the Pacific, Europe and Africa.

This shift in global dominance will certainly have an effect on business as markets demand preferences and opportunities continue to change. Business conditions will become more unpredictable and perhaps volatile.

By digitalizing your business processes you can effectively manage costs and scale the growth or direction of your enterprise with less risk.

Did you like the article enough to share it? How are you coping with changes in business conditions? We would love to hear from you! Please share your experiences and post your comments below.

If you want to know how you can digitalize your processes and workflows, please do not hesitate to give us a call or an email. 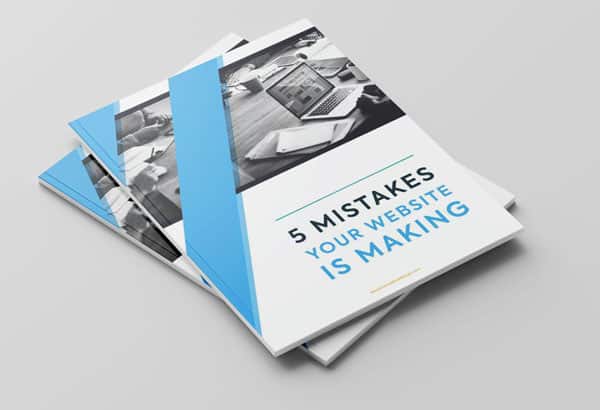 More Articles from Our Blog 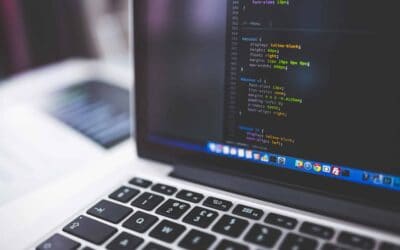 How To Qualify The Best Web Development Agency For Your Business

If you want to put up a website for your business, get it done right by hiring the best web development agency. Developing a website isn’t an expense. It’s an investment that can pay out dividends attractively and consistently for your business if it does what it’s...

END_OF_DOCUMENT_TOKEN_TO_BE_REPLACED 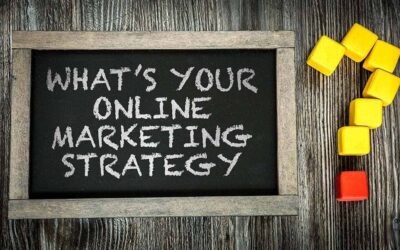 If you own a startup that secured venture capital in the hundreds of thousands or perhaps in the millions, then congratulations are in order. The truth is many startups and small businesses operate on a shoestring budget. As a consequence, key business strategies such...

END_OF_DOCUMENT_TOKEN_TO_BE_REPLACED 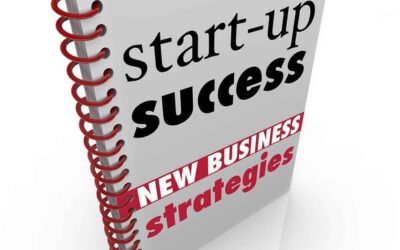 How To Launch A $100 Digital Marketing Campaign

If you’re planning to start a business, digital marketing should be included in your budget. It is the best way to promote your products and services to your target market. However, digital marketing costs money. If like most entrepreneurs, you have limited capital,...